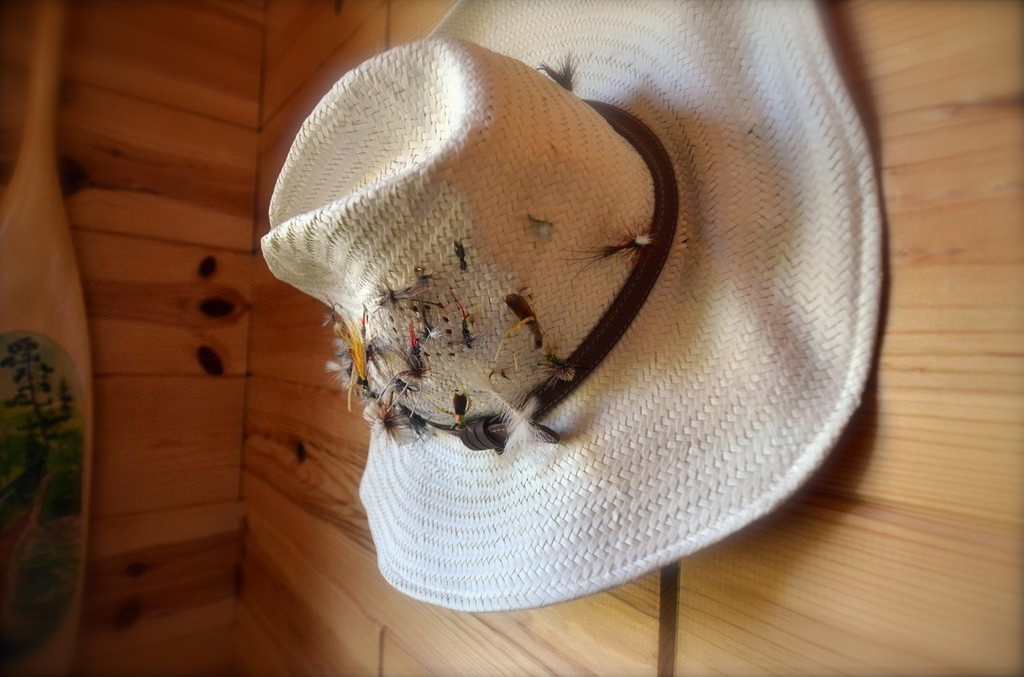 I hate to fly. I hate the crowds, the confusion, the inexplicable delays and the general claustrophobic feel of the entire experience. So when my good friend, Greg, invited me to fly fish on the Manistee River in northern Michigan, I never considered booking an airline ticket. Instead, I began planning my 900-mile drive around Wisconsin and across the Upper Peninsula. This trip would be too important to rely on Delta Airline’s 83 percent on-time performance rating.

Fourteen hours and three state border crossings later, I am pulling into a rented cabin that sits along the banks of the Manistee—on time and no lost luggage.

The first order of business is to stop at the Old AuSable Fly Shop in nearby Graying to get a shopping list of local flies. The guy at the fly shop recommends Borcher’s Drakes, Cabin Coachmans and something called a Black Skunk. We grab two of each. He also suggests that we pack some bug dope because the mosquitoes are thick this time of year. We are a little skeptical since the temperatures have barely risen above freezing all spring. But experience has taught us that we should always listen to the guy at the fly shop. So we buy a $12 bottle of mosquito repellent and joke that he probably works on a sales commission. As we would soon discover, he is just looking out for us.

With no schedule to keep, we take our time getting on the water. Most of the afternoon is spent attaching fly line to leaders, tying leaders to tippet, arranging fly boxes and taking inventory of our fly vests. Fortunately, I find my most essential piece of equipment in my upper right pocket—a pair of flip down magnifying glasses. (With my middle-aged eyesight, it is nearly impossible to tie on a fly without them.) The pace is slow, but purposeful, which gives us time to get caught up with each other’s lives.

When I finally step into the Manistee and start fishing, I am excited and frustrated at the same time. Excited because this is a new river that I have never fished before, and every bend looks like it could hold a trophy brown trout. Frustrated because I seem to have forgotten how to cast a fly. A good cast will have an elegant roll to it. My first few casts land awkwardly on the water in a snarled nest of monofilament. It takes a dozen casts or so before my muscle memory returns and the flies start rolling gracefully on the water.

Over the next three days Greg and I are able to catch several small brown and brook trout. We begin to get a feel for where the fish are located, what they are feeding on and when they will be rising. Greg ties a drop fly—or emerger—to his dry fly, which theoretically doubles his chances of catching a larger fish. I toss a weighted wet fly into several deep dark pools hoping to coax a fat bull trout out of his hiding place. Neither technique seems to work, so we go back to a simple dry fly and start catching small trout again.

Occasionally, we have to reel in our lines and let a group of kayakers pass by. Most are college kids who are packing enough beer to fuel their three-hour float trip. However, they didn’t think to bring any mosquito repellent. (Obviously, they didn’t talk to our guy in the fly shop.) As they paddle by us, we can see their exposed skin covered with painful red welts. Some are the size of quarters. River karma dictates that we let them use our bug dope and send them downstream.

In the hours we aren’t fishing, Greg and I talk about our jobs, our kids, the sorry state of music today and, of course, all the fly-fishing adventures yet to come. The bottles of gin and bourbon I brought from a micro-distillery in Montana are slowly disappearing. During one of our conversations, Greg asks if I’ve ever read anything by John Voelker, a well-known Michigan fly fisherman and author. I admit that I haven’t. He hands me a passage from a book entitled, Trout Madness.

“I fish because I love to. Because I love the environs where trout are found, which are invariably beautiful, and hate the environs where crowds of people are found, which are invariably ugly… Because in a world where most men seem to spend their lives doing what they hate, my fishing is at once an endless source of delight and an act of small rebellion.”

I read the passage again, trying to commit the words to memory.

I will repeat them often on the long drive back to Sioux Falls.