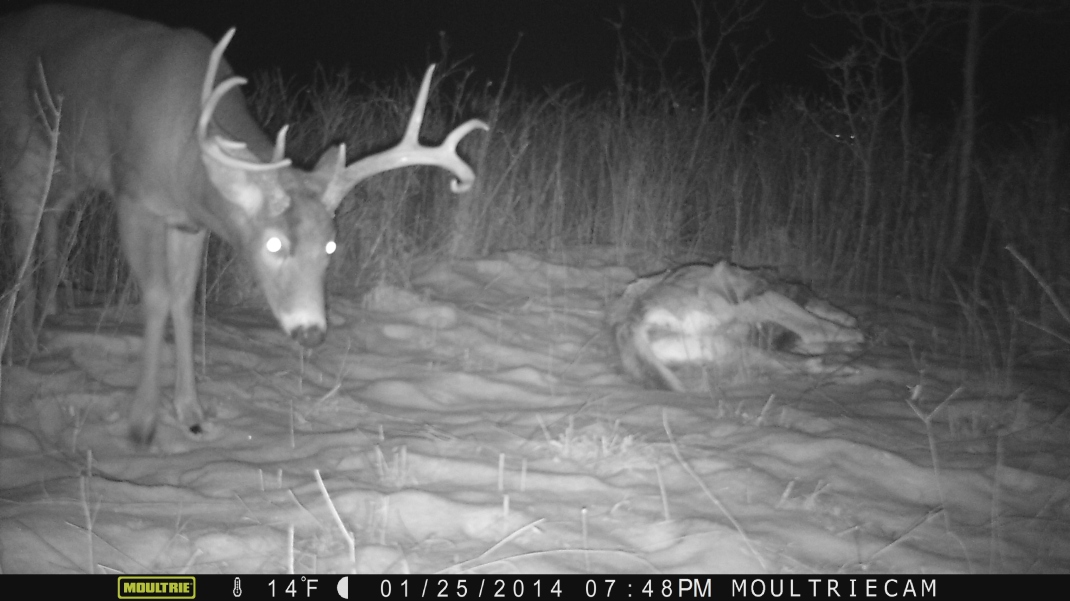 I was scrolling through Facebook a few weeks ago trying to catch up on a backlog of cat videos, political rants and vacation pictures from my friends. Then I came across something interesting from Thea Miller Ryan, director of the Outdoor Campus in Sioux Falls. She had posted a series of wildlife photos taken with a trail cam.

Skunk and raccoon circle around a deer carcass 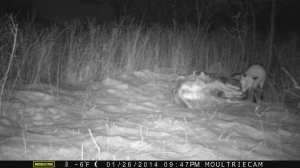 A trail cam is a remote camera that automatically takes a picture whenever it senses motion. Deer hunters typically use them for pre-season scouting to determine where they should set up their tree stand. In this case, the trail cam was used to study wildlife activity at the Outdoor Campus in a non-intrusive way.

According to Ryan, campus employees set up a trail cam over the body of a dead deer in the park. The decomposing carcass was far enough off the trail where it could not be seen or easily found by visitors.

Every well-balanced ecosystem depends on death to provide life—and a decomposing carcass is like an oasis of nutrients for other animals. Scavengers and carrion feeders consume parts of the carcass and use it as an energy source. With the sub-zero temperatures we’ve been experiencing all winter, a dead deer is going to attract a lot of hungry critters.

When the Outdoor Campus uploaded their first set of images, they discovered at least six different animals had crossed the camera’s path: white tail deer, skunk, raccoon, fox, great horned owl and, surprisingly, a feral cat. That is a lot of wildlife for a one-hundred-acre plot of land tucked between 41st and 57th Street—perhaps the busiest square mile in Sioux Falls.

The animals are seen in their natural state, foraging for food in the middle of the night. Their eyes, vacant and glowing, appear ghost-like, which adds to their mystique. What intrigues me most about these images is that I cannot figure out what’s going on. These are like scenes from a foreign language film with no subtitles. The viewer has to use a little imagination and figure out the story.

From a biological standpoint, I understand why raccoons would be drawn to a decomposing carcass. They are scavengers. What I don’t understand is why one particular raccoon at the Outdoor Campus has no tail. I can only image the unfortunate circumstances that led to his lost tail. Maybe he got it caught in a trap or had a nasty encounter with a hunting dog when he was young. As cold as it has been, maybe his tail snapped off like an icicle.

There are other scenes that pose more questions than answers.

A four-by-four buck visits the decaying deer every night. However, deer are not carnivorous and have no reason to hover around a decomposing carcass. The Outdoor Campus doesn’t have a definitive explanation for the buck’s behavior, but it does have a few interesting theories. 1) He is simply curious. 2) He is attracted by the scent. 3) There is something paternal going on here, which requires a very broad anthropomorphic assumption.

The Outdoor Campus hoped to chronicle several different animals with their new trail cam, but they never expected to see a feral cat staring into the lens. Somewhere in Sioux Falls there is a former cat owner who either purposefully abandoned, or unintentionally lost, their pet years ago. Today, that cat is fending for itself just like other wildlife. It is safe to assume there are a lot more undomesticated cats out there than we realize.

These are the stories that unfold every night, right in the heart of Sioux Falls. Tail-less raccoons, curious bucks, playful skunks and abandoned cats go about their lives while we sleep—and hide away when we awake. The camera gives us a small window into their world.

Perhaps that is why I find the images so fascinating.

NOTE: This article was originally written for the Argus Leader and published in February, 2014. Photos are courtesy of the Outdoor Campus.